We think it’s important you hear and see from Sharp Shooter puppy owners who hunt, train, test, and live with their pups every day of the year. In addition our training clients love to also show off their accomplished dogs. This page is dedicated to the members of Team Sharp Shooter! 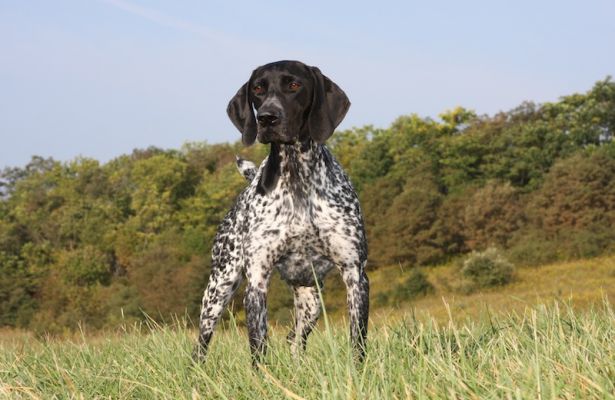 Vogue (INT CH, VC Sharp Shooters Strike a Pose) is everything I thought I wanted in a versatile hunting dog...and much more. I shot pheasants over her in Nebraska at seven months and received a Prize I NA at nine months. The SSK gang then took over and under their tutelage guided her to a UT Prize I at 17 months and her VC at 2.4 years. She is an all day, every day hunting dog. Vogue is extremely athletic and her prey drive is off the scale. She is as powerful in the water as she is in the field, and she is a looker to boot.

So, what’s not to love? Lots! She lives to hunt and train, which would be great except work gets in the way and standard time in the winter precludes much weekday training other than obedience and retrieving drills. Weekends are it; but that energy and drive have to be expended somewhere the other five days. She ploughs through the flower beds in the off chance a lost quail may have taken up residence, sight points the pigeon coop 10 minutes every day, and stares up into the pines looking for squirrels until MY neck hurts. Don’t get me started on her digging up the lawn looking for moles. And it doesn’t stop on land; regardless of the weather Vogue must do a duck search in the pool everyday, but that one’s on me because I threw a teal for her to retrieve once when she was a pup. One successful pool duck search in 3 years and she is still the optimist. 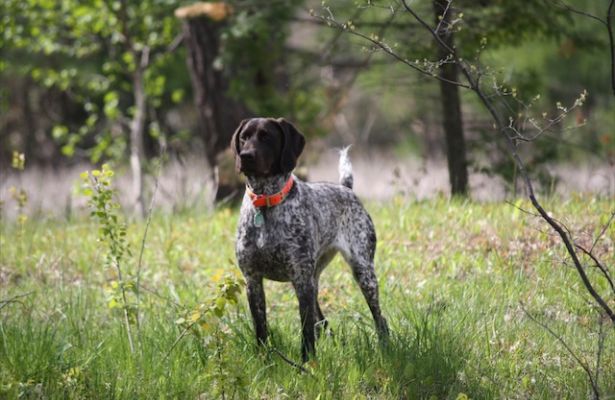 VC Sharp Shooters Going Places (Abby) definitely lives up to her namesake. She's always on the move and looking for some mischief to get into...birds (chipmunk, squirrels) can hide in the darndest places. Abby is a two time Prize I Utility dog and she earned an NA Prize I, 112 points. She is the product of VC Roughneck Walk the LIne and VC Sharp Shooters Fifth Element. She is owned by Joe and Janet Renfrow of Danbury, WI. 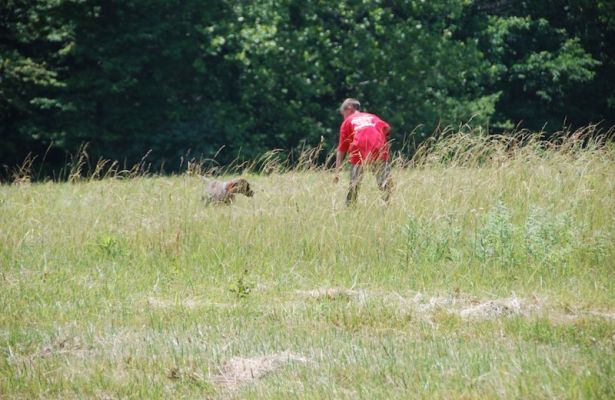 Delia (Sharp Shooters Last Fair Deal) lives with her family in Howell, MI. Her owner/handler, Noah, successfully handled her to an NA Prize I, 110 points. Here she is pointing her pheasant track. Noah and his dad Zach have reported she swims "like a beaver" and is becoming an accomplished Ruffed grouse dog. A few weeks before her NA test Zach entered Delia in an AKC Walking Field Trial "for her to get some practice;" low and behold she took first place in the Open Puppy division. She is the daughter of INT CH, VC Sharp Shooters Hot Rod MH and VC Sharp Shooters Fifth Element. 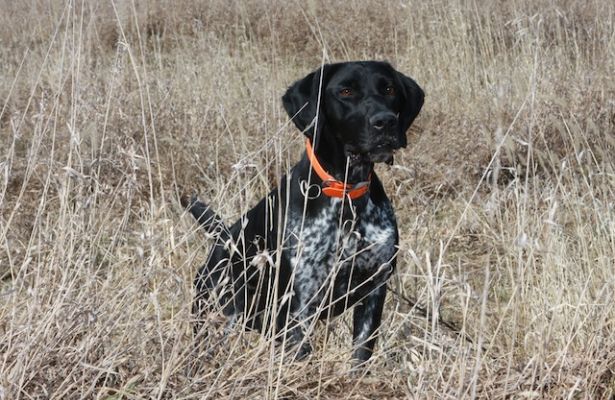 That look of shear intensity on Doc's face is NOT unique to this photo. In fact, he wakes up and goes to bed that way. VC Sharp Shooters Doc Holliday got a double dose of drive from his parents INT CH, VC Sharp Shooters Man in Black MH and VC Sharp Shooters Spy Girl. His love to work is hard to fathom yet he's a great house dog and the biggest cuddler you could imagine. He's a handful, but when you are hunting the prairies of North Dakota it's worth every ounce of enthusiam. Doc has earned three Prize I's in Utility and an NA Prize I, 112 points. When Geoff Ferrer's kids saw Doc in our kennel, "they had to have him." He now makes his home with their family in NJ. 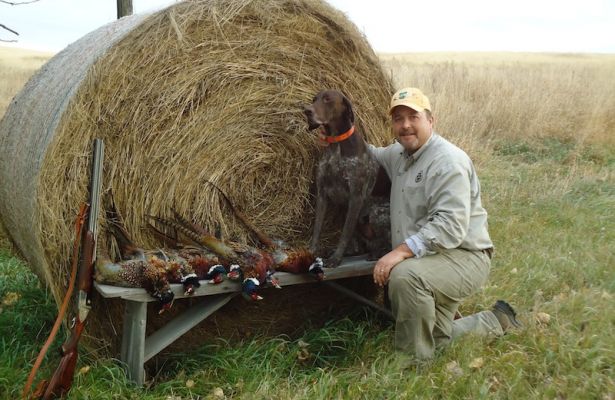 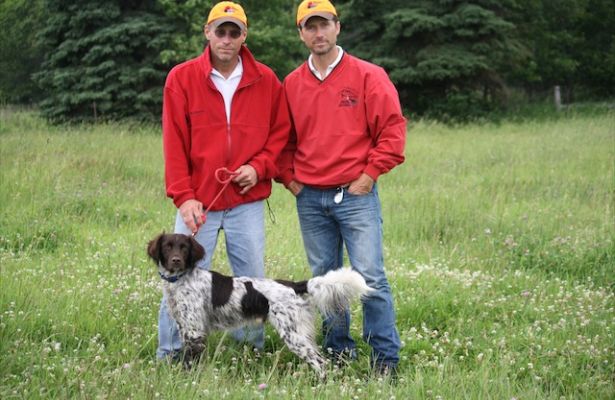 Lakewood's Augustine Altman (Austin) is a talented small munsterlander that has a special bond with his owner Rod Jensen of Western, MN. We trained Austin for his Utility test and worked with Rod for the month prior to the test so he could handle him through the event. They came through with flying colors achieving a Prize I, 204. www.lakewoodkennel.com. 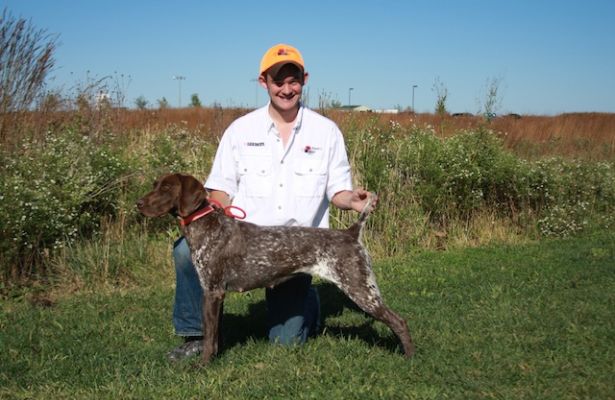 Bradley Bischof of New Richmond, WI is a dedicated hunter and dog trainer/handler. He has trained his dog, VC Sharp Shooters Wild at Heart (Daisy) form day one. Daisy got a Prize I, 112 points in Natural Ability, a Prize I in Utility with a score of 196 points and earned the Versatile Champion title in 2010. Daisy's a high power dog like her parents INT CH, VC Sharp Shooters Man in Black MH and VC Sharp Shooters Spy Girl. Now they are both enjoying their hunting seasons and living the rewards of having a well trained bird dog! 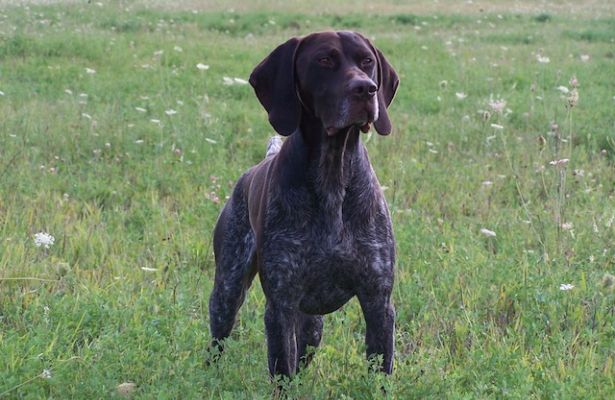 INT CH, VC Wing Shot's Sharp Shooter II MH (Deuce) is a melding of his sire and dam's best attributes: conformation, cooperation and style. In the field he'll point until you get there -- no matter how far out he is. He backs like he points, staunch and stylish; strong, inherent traits from both Shooter and Jewel.

I (Laura) see so much of his sire in Deuce it's a bit scary at times. From the way he walks around the house, to lying on his dog bed, to hunting pheasants. His physical looks are what grabs your eye. Confidence is something he has plenty of; from the first day he walked in our house it was like he'd been there all along.

Deuce is out INT CH, VC Shooting Starr's Sharp Shooter MH and Sundance Jewel. He is owned by Laura and Mark Picard of Take Aim Kennels in Cary, IL. .(JavaScript must be enabled to view this email address)